Japan has passed controversial security bills that will allow the country’s troops to fight overseas for the first time since the second world war, despite widespread voter opposition and mass protests in central Tokyo.

MPs in the upper house of parliament passed the legislation in the early hours of Saturday morning Japanese time, following days of high political drama marked by scuffles, delaying tactics and fierce exchanges on the floor of the chamber.

The new laws effectively ease constitutional restraints on the country’s forces to allow them to exercise collective self-defence, or coming to the aid of an ally, even if Japan is not directly threatened. 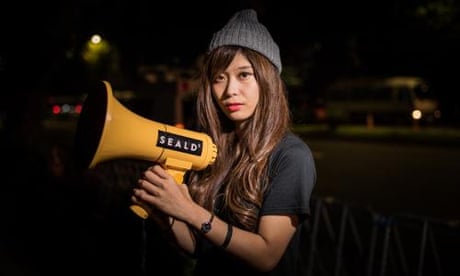 The move, the biggest shift in the country’s defence posture since its wartime defeat in August 1945, prompted mass demonstrations and frantic attempts by the opposition MPs to delay the bills’ passage.

On Friday, five opposition parties, led by the Democratic party of Japan, submitted a series of unsuccessful no-confidence motions the prime minister, Shinzo Abe, and other senior Liberal Democrat party figures in an attempt to postpone a vote.

The LDP and its allies simply bided their time before using their majority in the upper house to pass the bills into law as thousands demonstrated outside. The more powerful lower house passed the bills in July amid a walkout by opposition MPs.

Abe’s push to give Japanese troops a wider international role has proved the most divisive policy of his three years in office.

A conservative who has always regarded the pacifist-oriented article 9 of the constitution with scorn, Abe believes Japan must be better prepared to respond to a new and uncertain security environment that includes a more assertive China, a nuclearised North Korea and international terrorism.

Opponents warn that Japan could be dragged into damaging conflicts overseas at the behest of its main ally, the US.

Earlier in his premiership, Abe abandoned plans to revise the constitution when it became clear he would struggle to win the required two-thirds majorities in both houses and a simple majority in a national referendum. Instead, he opted to introduce new legislation that reinterprets the constitution to allow for collective self-defence.

Critics have charged Abe and his allies of abusing their parliamentary majority to push through the change, despite widespread public opposition and warnings from respected academics that the bills were unconstitutional.

“They are using democratic institutions and processes, but the way he uses them is not terribly democratic,” said Keio University professor Yoshihide Soeya.

The US will welcome a more active Japanese military as it seeks to check China’s military build-up in the South China Sea and encourage its ally to play a more active role in their security alliance.

Hours before the vote, however, China warned that it was capable of responding to a more “provocative” Japan.

“China is unable to affect Japan’s choice. We can counter this by developing a more powerful military to withstand Japan’s provocation,” the Global Times newspaper said in an editorial.

The Chinese foreign ministry indicated that Beijing sympathised with opponents of the bills. “We demand that Japan genuinely listen to just appeals from both at home and abroad, learning from historical lessons and adhering to the path of peaceful development,” ministry spokesman Hong Lei told reporters on Friday.

The runup to the vote sparked chaotic scenes at meeting of a special legislative committee, where the bills were being debated before being sent to the upper house.

Opposition lawmakers rushed forward to confront the committee chair amid accusations that he was attempting to ram a vote through at short notice. TV footage showed MPs pushing and shoving each other as opposition politicians tried to prevent the vote from being completed.

On Friday, during a no-confidence motion against Abe, Taro Yamamoto, an opposition MP, tried to hold up proceedings by performing an “ox-walk” shuffle from his seat to the podium on the floor of the chamber. Dressed in a black suit, Yamamoto produced Buddhist prayer beads as if he were attending a funeral.

Abe was determined to push the bills through the upper house before the start of five consecutive public holidays on Saturday.

An extended debate in parliament over the weekend would have brought large numbers of protesters on to the streets and underlined the strength of public opposition to Abe, whose approval ratings are their lowest level since he became prime minister in late 2012.

An Asahi Shimbun poll published this week showed that 54% of voters oppose the bills, and 68% saw no need to push the legislation through during the current parliamentary session, which ends on 27 September.

The same poll showed support for the Abe cabinet at 36%, down two percentage points from last month. Security experts say the change could herald a more adventurous era for Japan as it attempts to define its role on the international stage.

“The bills are a psychological message to the world that an era in which Japan should not be involved in conflicts because of its exclusively defence-oriented policy is over,” said Hideshi Takesada, a professor at Takushoku University in Tokyo.